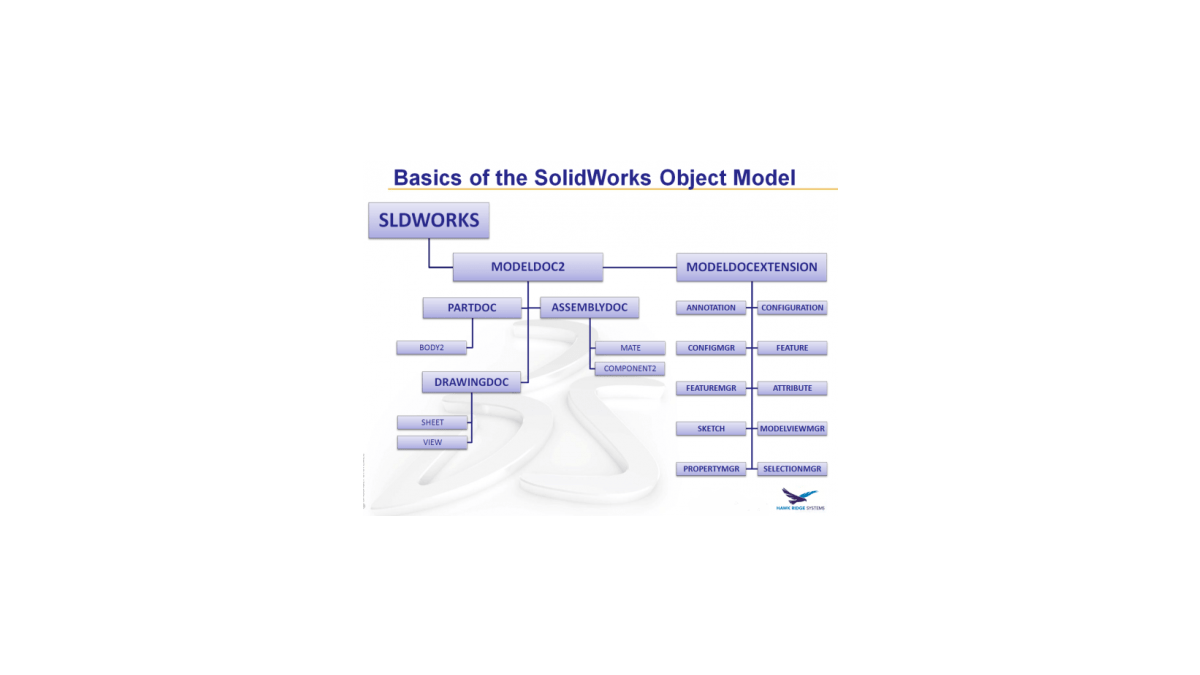 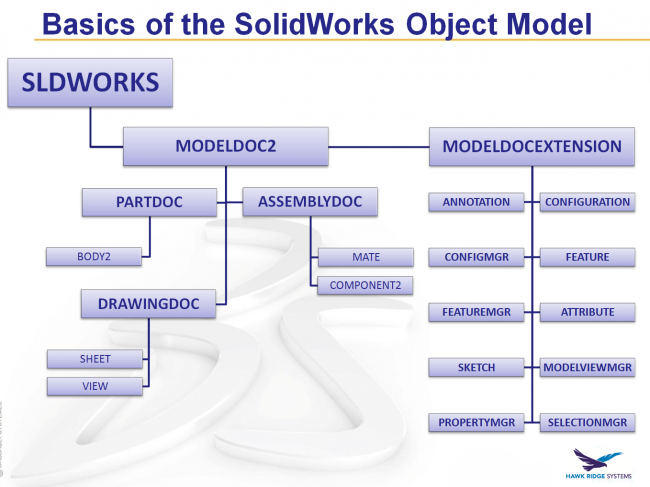 In the previous post of this blog series on the SolidWorks API, we discussed the four lines of code that get generated automatically whenever we start a new macro. So where do you go from there? Most commonly, we’ll then connect to the active SolidWorks document or open a new or existing SolidWorks document. We can access these things using statements of this type:

We’ll discuss parameters in a later post, but notice that before we call each function, we specify “swApp.” In order to access functions, we need to specify to the code where these functions are coming from. In the case of these first few functions, they all belong to the top level SolidWorks application. Usually, you’ll also want to do something with the document, such as get some information about the geometry, add custom properties, or traverse the feature tree. Thus, it’s helpful to store the newly created/opened/accessed document into a variable. Our statements would then look like this:

Recall from the previous post that the “Dim” statement is used to declare a variable in which to store some type of data (in this case, a ModelDoc2 object), and that swApp is the variable commonly used to store a pointer to the SolidWorks application.

In this case, what we’re doing is declaring the swDoc variable as a ModelDoc2 object (an umbrella object that encompasses parts, drawings, and assemblies) and then taking whichever document is currently active in SolidWorks and assigning its address to the swDoc variable. By declaring swDoc as a ModelDoc2 object, we have access to all the functionality defined in the IModelDoc2 interface (see the API Help File and browse to SolidWorks API Help -> SolidWorks.Interop.sldworks Namespace -> Interfaces -> IModelDoc2).

The SolidWorks Object Model extends far, far beyond what is shown here, but it is helpful to have a visual representation of the basic structure. The implication of the Object Model’s structure is that we have to access features through the specific interfaces that are defined by the API.

For example, under the IModelDocExtension interface, there is an “InsertBomTable2” method that creates a Bill of Materials table in an assembly or drawing document. However, we can’t just drop “InsertBomTable2” into our code and expect the program to figure out what we want.  We have to start from the “SldWorks” application object, then go to a ModelDoc2 object, then go to that object’s ModelDocExtension interface, and then finally call the InsertBomTable2 method. The actual code to do this would look something like this:

Actual execution of the above code would require proper parameters to follow the swDocExt.InsertBomTable2 function call. Again, we’ll talk about how to figure out the parameters of functions from the Help file in a later post.

See the previous posts from this series:

Getting Started with the SolidWorks API - Part 1