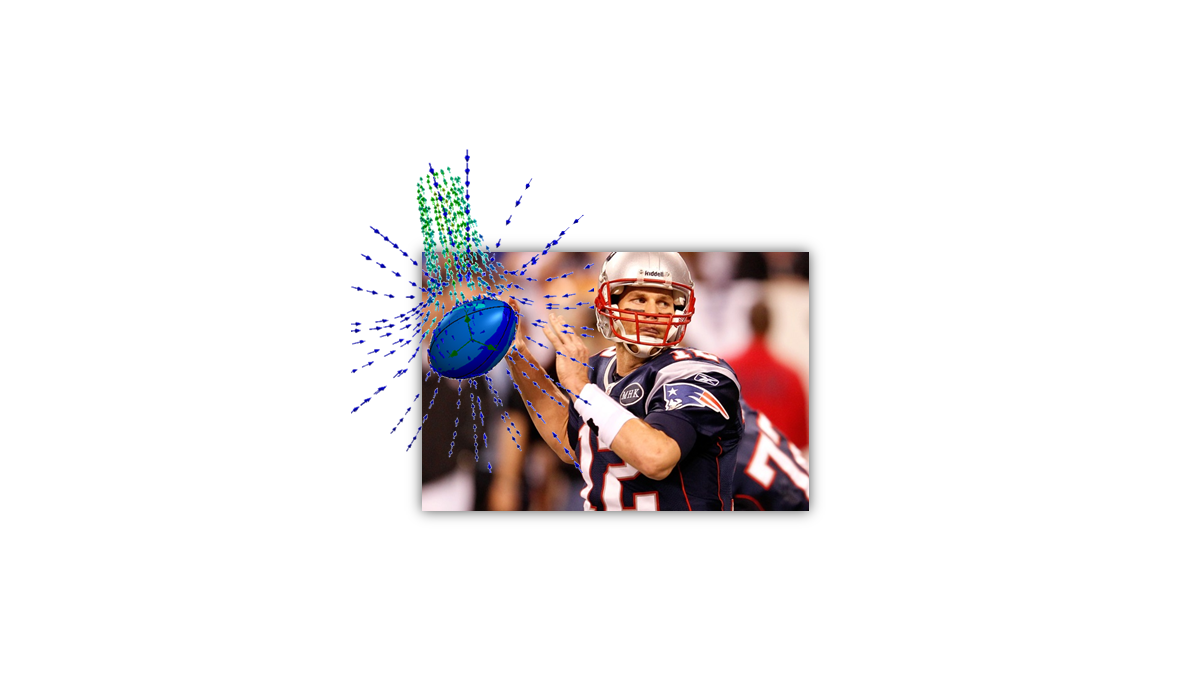 Whether you’re a fan of the National Football League or not, by now word has spread to even the most dedicated SOLIDWORKS drafter of the scandal over last week’s AFC Championship game, in which the New England Patriots allegedly violated NFL rules by intentionally under-inflating their footballs. How much this benefited quarterback Tom Brady is still up for debate, but the more important question surrounding the game arose last Friday when Coach Bill Belichick stated that the team’s own investigation found Mother Nature was to blame for the recorded drop of 2 psi measured at halftime. A plethora of voices from academia have weighed in, with many agreeing that taking the team-supplied footballs from the warm environment of the locker room to the chilly field of Foxborough- er, that is, Gillette Stadium, would have caused a corresponding drop in pressure. 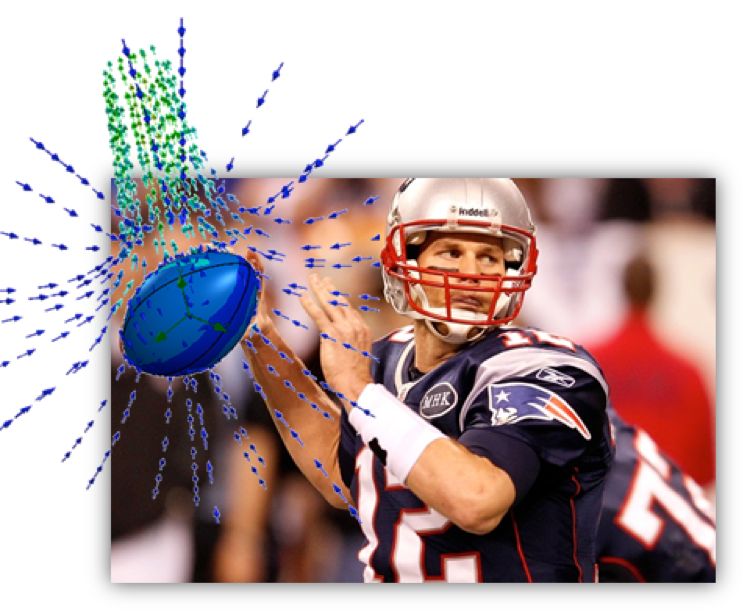 Professor Richard P. Binzel at MIT, for example, used the ideal gas law to estimate that “a 5 to 10 percent dip in temperature could bring about a drop of 0.5 to 1.5 pounds per square inch, or psi, in a ball’s air pressure.”

We in the world of simulation are aware of both the power and the limitations of hand calculations. In this case, it does appear that the ideal gas law predicts at least some of the reported pressure drop, but using this equation makes one big assumption: that the temperature of the air inside the ball actually would cool down to the same temperature as the air on the field. Luckily, a heat transfer problem like this is just the of type thing SOLIDWORKS Flow Simulation, our embedded computational fluid dynamics tool, is designed to tackle.

To start with, we need a 3D model of a football, which luckily I know how to create in SOLIDWORKS: 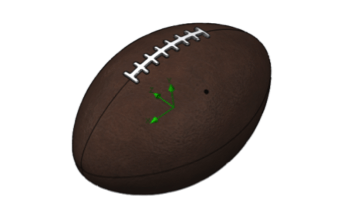 Going through the setup wizard of our first project, we need to make sure to enable the key physical conditions that make for an accurate simulation. First, I selected an External analysis and enabled Gravity so we can simulate the natural air currents around the outside of the ball. Heat conduction in solids needs to be turned on so we can simulate the pigskin cooling down once on the field, thereby cooling the air inside. Also, Time-dependent has been selected since I need to know how quickly these temperature changes would happen to see if the story adds up.

On the Fluids tab, I selected the pre-defined model for air; no further work required. Under Solids, we’d need to choose the material for the ball, which nowadays is constructed of a synthetic leather with a bladder lining the inside. Those materials don’t exist in the default engineering database, so I created a custom material with a thermal conductivity of 0.2 W/m-K, similar to both rubber and leather which have good insulation.

Finally, it’s important to select the proper initial and ambient conditions. The game time field conditions in Foxborough were reportedly 51 degrees Fahrenheit, with an atmospheric pressure of 14.64 psi (slightly below normal). We also have the option in Flow Simulation to set a wind speed, but here I left it at zero. Even though there would have been some wind, and the ball would have been flying through the air a good part of the time (cooling it even faster), I also ignored the heat that might have been added to the ball from players or referees holding it.

At this point, the only remaining task was to enter the initial conditions of the air inside the ball, by creating what’s called a Fluid Subdomain. If the ball was really inflated to the league-minimum 12.5 psi inside the warm locker room (I guessed 73˚ F), the air inside the ball should still have those same conditions the minute it’s brought out onto the cold field, barring any leaks (intentional or otherwise). Note here that I’ve typed in 27.14 psi in the pressure box, but don’t worry- I haven’t pulled a Jim Marshall. Flow Simulation always uses absolute pressure in its setup and results, so a “gauge” pressure of 12.5 psi really means 12.5 psi above atmospheric. In other words, the absolute pressure is 14.64 + 12.5 = 27.14 psi. 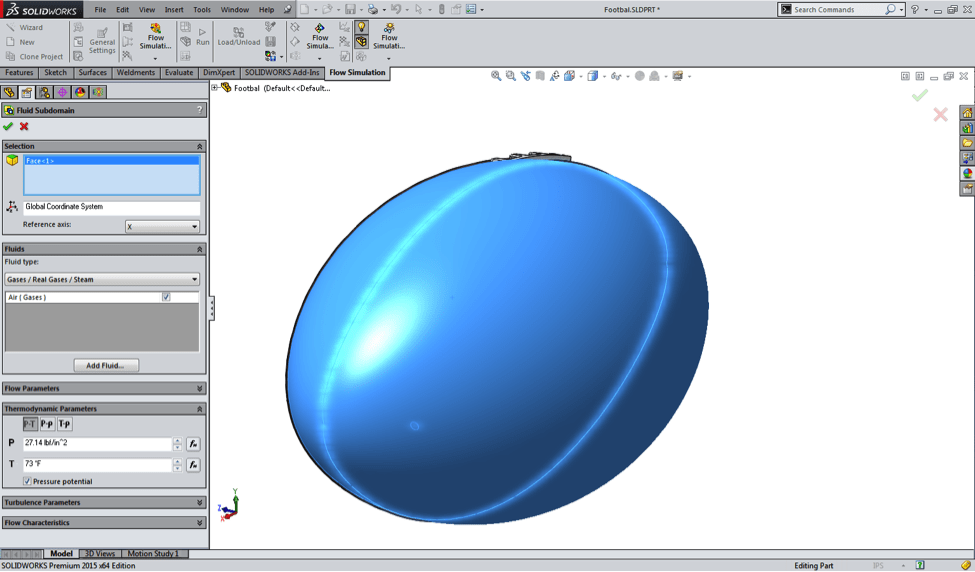 Before running the analysis, I made sure to set up some Goals in my project, which allow me to quickly see the key results. In this case I selected the average temperature and average static pressure on the inside faces of the ball, plus created my own custom Equation goal which will report gauge pressure, just the same as any of the NFL referees would have seen. 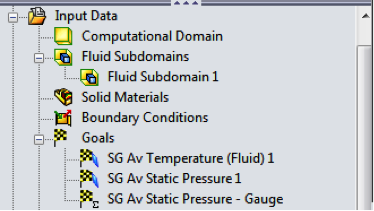 So what are the results? Assuming a time out on the field of 60 minutes, or 3600 seconds, the cold New England conditions would in fact cool the ball down a lot, to about 52.5 degrees, but not quite as cold as others have assumed. 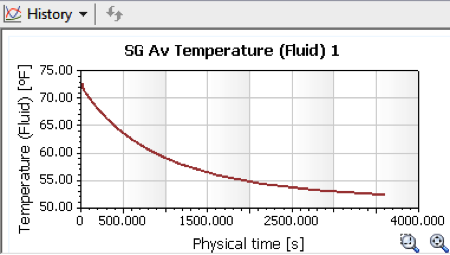 So what effect did this drop in temperature have on the ball pressure? 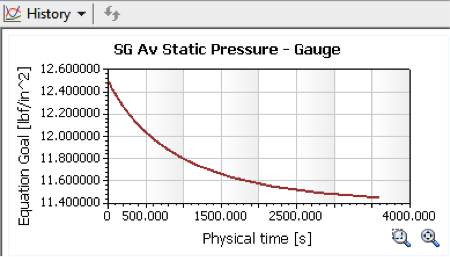 SOLIDWORKS Flow Simulation reports a final pressure of 11.45 psi, equal to a drop of 1.05 psi. So, this is a partial explanation, but it doesn’t fully account for the drop of two “pounds” reported by the officials at halftime. But wait! There’s more!

This is where Coach Bill Belichick comes back into the discussion. During his now infamous press conference, Belichick claimed that in addition to the on-field cooling, the balls could have been affected by the team’s normal “conditioning” process, where they try and break in the leather to create a more pleasing grip for Brady. 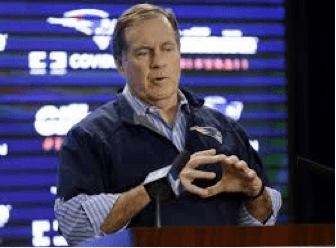 “So that process of creating a tackiness, a texture, a feel — whatever the feel is, it's just a sensation for the quarterback, what's the right feel, that process elevates the PSI approximately 1 pound.”

Bill Nye the Science Guy, Seahawks fan and hero of nerdy 90’s kids, weighed in, saying Belichick's explanation “made no sense.” But what if Belichick was right, and it is in fact possible that rubbing the footballs heated up the air inside to above even the locker room temperature, leading to an ever bigger temperature (and thus pressure) drop out on the field?

Once again, hand calculations are of no use here, but we can have Flow Simulation find us the answer. This time I had to make some larger assumptions: namely, that the balls would be “conditioned,” i.e. rubbed for something like 5 minutes, or until the outside surface of the ball was roughly the temperature of someone’s hands. A bit of research informed me that in a 73˚ F room, the average temperature of a person’s hands is 86˚ F (not quite your internal body temperature of 98.6 ˚). To simulate the friction of the conditioning, I decided to apply a heat generation rate of 10 Watts to the outside of the ball (by comparison, the average human body at rest generates about 70 W of heat).

While it pains me to say so, after plotting the results I was forced to conclude that in this instance, Bill Nye was not, in fact, the Science Guy. 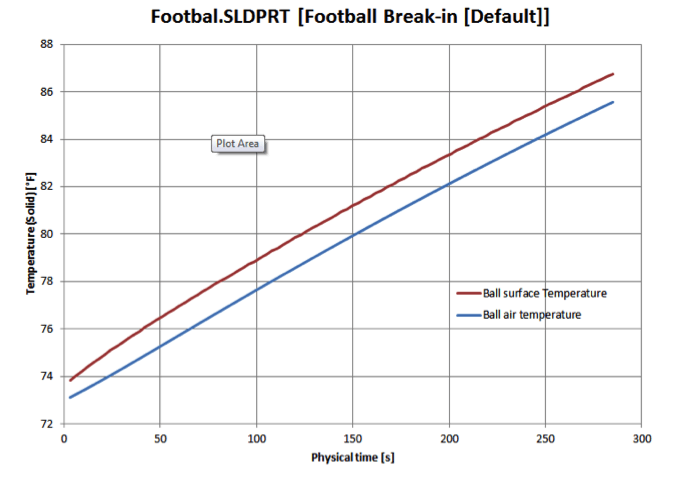 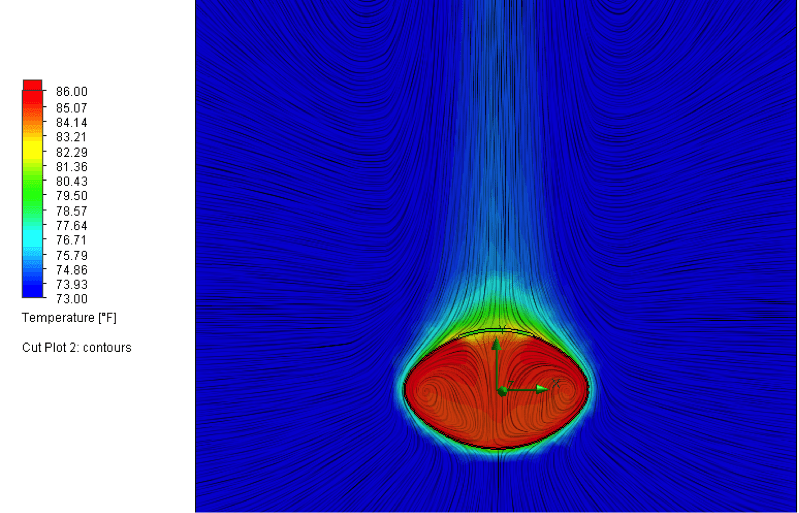 If the outside of the football were warmed in such a manner, the air temperature inside wouldn’t lag far behind, reaching a maximum of about 85 degrees after about 4 ½ minutes. The corresponding increase in pressure turns out to be real, the balls would measure just under 13.1 psi at this point.

Of course, what Belichick and others have claimed is that the pressure in the Patriots’ footballs was set after the balls were warmed. So, the question becomes, what would the footballs have measured at halftime if they were in fact filled to 12.5 psi when the air inside the ball was 85˚ F, rather than the assumed locker room temperature of 73˚? I plugged in the new number and re-ran my first simulation to find out. 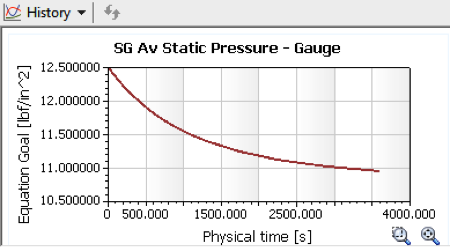 Behold, after 60 minutes of exposure, the air inside would still have cooled down significantly, albeit about 3 degrees above ambient. Still, the now-larger temperature change of 31˚ results in a corresponding drop in pressure to 10.95 psi, aka “under-inflated” by 1.55 psi. We don’t know what the official measurements of each ball were, but if I wasn’t a technical guy I could see myself rounding this off and telling a reporter “two pounds.” We could also question many of our assumptions, was the ball actually out on the field longer? Did the air temperature drop below 51˚ F during the game? Doing so is as simple as changing the setup conditions, or even the 3D model, and hitting Run.

So, what am I saying, are the Patriots the good guys after all? No, you can argue that they knew what they were doing, gaming the system to create cushy, under-inflated balls for Mr. Brady. What I can say is that Bill Belichick’s explanation is plausible: normal temperature changes prior to and during the game could have caused the balls to drop by almost 2 psi without somebody actually letting any air out.

The only thing left to do is put Flow Simulation to its traditional use, simulating engineering problems to improve the quality of products. Now I just have to figure out what the current defect with the San Francisco 49ers is, and give them a call…